Where do I even begin with this film.  If you enjoy animal adventures, New York City and spontaneous singing I would recommend, The Secret Life of Pets. I didn’t set the bar high for this film for multiple reasons but I still enjoyed it’s content. While watching this film I noticed a lot of similarities from other Disney movies and kept asking myself If I’ve seen this story played out before. 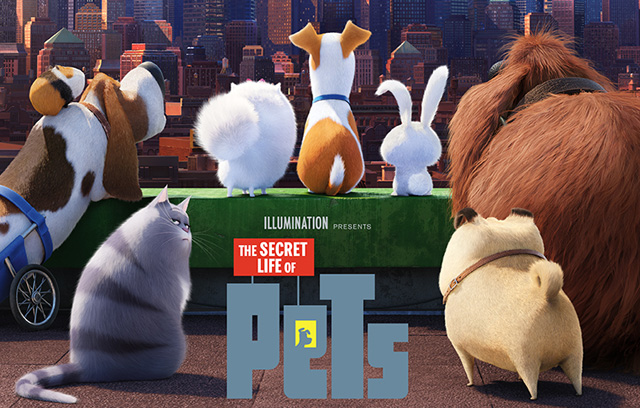 If you’ve seen this movie you know what I’m talking about. The similarities of the movies of Oliver and Company, Lady and the tramp 2: Scamps Adventures and Toy Story 3 are all present. Oliver and Company’s similarities of abandonment, acceptance of a group of dogs or outcasts and the singing are there. Lady and the tramp 2 similarities of finding and tricking outcasts dogs, accepting your place in society and animal control / dog catchers are there. Toy Story 3’s similarities are the same from acceptance of a group or affiliation, companionship of friends and enemies and a journey throughout the City.  If you enjoy any of these films then Secret Life of Pets is for you. There was also a random singing session from the “Grease” soundtrack that i thought wasn’t necessary and was just a time slot to fill for the film. The animation was very well done and I enjoyed the flow of the dogs hair from dry to wet and the funny characters that brought this film to life. The comedy of the film was there but it would have been nice to see a consistent story without it jumping between characters. The overall message was well rounded about people being able to change and getting along with others that might share different ideas or backgrounds. I thought it was a little over the top having a bunny  wanting to bring forth a revolution and having initiations from being bitten by a snake, oops sssspoiler; but  overall i would let a kid see this movie. My final review of this film would be 2.5 bones out of 5.