Miss Hokusai is a 2015 anime film about the life and works of Japanese artist Ukiyo-e and painter Katsushika Hokusai. The movie is as seen from the eyes of his daughter, Katushika O-Ei. The origin of this anime is based off of a Japanese manga series written and illustrated by Hinako Sugiura.  The manga is a collection of short stories that are not connected. The original run of the mange was from 1983 to 1987. The anime movie was released on May 9, 2015 with critical acclaimed reviews. It won the Jury Award the 39th Annecy International Animated Film Festival.  It received its North American premier at the Fantasia International Film Festival between July 12 and August 5, 2015.Which it won the Gold Audience Award for best animated feature film. It also won Best Animated Film Award at the Mainichi Film Awards.
G KIDS expanded the movie in over 85 theaters  over weekend in the month of October . The movie runs around 90 minutes and was directed by Keiichi Hara. Keiichi Hara is known for his work on Crayon Shin-Chan, Doraemon and 21 emon. The story was written by Miho Maruo and produced by Production I.G. The movie is rated Pg 13 for some sexual tension. 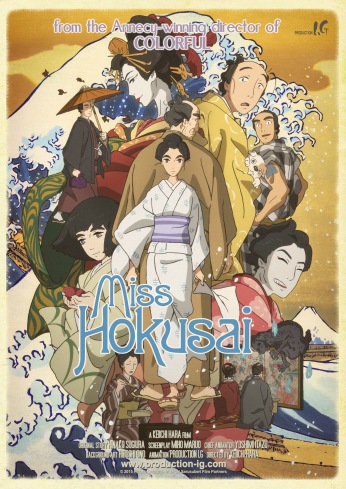 I probably would have enjoyed this movie a lot more if I invested some time in reading the manga. After seeing this movie I already am trying to get a copy of the manga series. Going into this movie I expected a long story about the artist and his life. What I did not expect was a collection of short stories from these artist and what they experienced. The story is linear but there are many stories intertwined to get a feel of the characters and their backgrounds. I absolutely loved the traditional art and with studying art history in the past I enjoyed the many  mediums they used. I also enjoyed the references of Hokusaias, Great Wave off Kanagawa  and a few other prints he did.  I would have liked to see more story background about the father, Hokusai. I thought the ending was a little abrupt but I enjoyed the short stories and illustration of the movie. The illustration was certainly not a disappointed and it kept the story interesting. I do expect this movie to make the top 10 finalist for best animation at the Academy Awards but I don’t think I expect to see this movie make the top five at the Academy Awards for best animation. Overall I give this movies story a 3 out of 5 woodblock prints.