Films In the Program:
Information about Odense International  Festival

The streets at night; a slow saxophone plays. A howling wolf roams the city. Dad is on the loose. Sally, an introverted 15-year-old girl, tries to tame her wolf father, who has lost himself in the wilderness.
Director: Juliette Viger
Denmark

A mahjong game is planned. Everyone waits for the last player to show up. The other three have no choice but to wait and sit there silently in tears. Never losing hope, they do believe that the fourth player will come. They look up to the sky waiting for this miracle to happen.
Director: LEI LEI
China 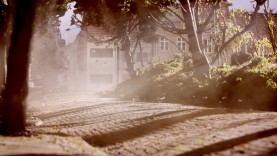 A couple lives in an idyllic seaside village, where giant machines have begun to upturn the cobblestone streets, and dust fills the air. Yet its residents go about their everyday lives. Losing a child and losing a city are two different things, yet loss destructively makes itself anew each day.
Director: Sunit Parekh
Denmark 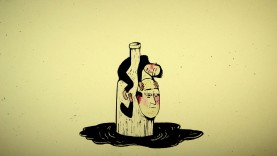 James observes his family. They ask him questions and don’t listen to his answers, they give advice but don’t follow it, they stroke him and slap him, but it’s ok; that is the way Sunday lunch has always been and always will be.
Director: Celine Devaux
France

Can it be too late to make up for lost time? A man recalls a moment of a lost opportunity to communicate with his daughter. Their brief meeting after years undermines his world and renders his words meaningless
Director: Tal Kantor
Israel

Glen is barely a man. In a desperate attempt to tap into his masculinity, he attends a primal scream therapy session. Surrounded by wailing men, he cannot even make a sound. Another member of the class pushes Glen too far, and he finally lets something out – a miniature version of himself which does whatever it wants, regardless of the consequences.
Director: Simon Cartwright
United Kingdom

In Brutal Bullet, a computer game, our hero Kane Skullhead lives by ‘shoot first, ask later’. When a virus infects the computer’s binary system, Kane finds a new, deadly antagonist in the antivirus threatening to take away his beating heart. A chase of life and death has begun. And it will lead him into unchartered territories.
Director: Michael Helmuth Hansen
Denmark

Yul and the snake

Thirteen-year old Yùl goes to the desert with his big brother Dino to conclude a deal with Mike, a thug with a car, an angry mastiff, and an open beer in hand. When things go wrong, a mysterious snake appears. Yùl follows the snake.
Director: Gabriel Harel
France

Mishima lives in the shade, surrounded by worms in his underground habitat. One morning, he discovers beautiful Saiko, who awakens inside a rose. Saiko is thirsty. Saiko is hungry. Saiko is cold… But Mishima, like worms, is not supposed to live in the sunlight.
Director: Aude Danset
France

Platelets and white blood cells are mixing. Like friends, we think looking through the microscope, or enemies. But the body is sustained silently by a force of neither negative nor positive intention. Blood is simply flowing. In the blink of an eye, the cell goes through its whole life and dies silently.
Director: Li Ang and Cai Caibei
China

Disillusioned with his life in the suburbs of segregated Beirut, Omar’s discovery lures him into the depth of the city. Immersed into a world that is so close yet so isolated from his reality, he eventually loses track and finds himself struggling to keep his attachments, his sense of home.
Director: Ely Dagher
Lebanon 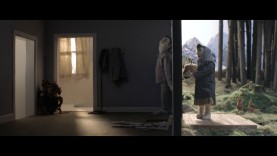 Edmond is depressed and sitting on the brink of a lake, ready to plunge with a rock tied to his foot. But why? He slips through the floorboards of his mind and travels back through his life, looking for the root of his unhappiness.
Director: Nina Gantz
United Kingdom

Small machines live in darkness and dream about the sun. Soldyrkerne suit their mechanical houses and screws light bulbs in order to read, but wants only to look towards the light in earnest again. Perhaps happiness is so great that you can only hold it once and then perish ?
Director: Gokalp Gonen
Turkey

An uninspired father is trapped between the walls trying to write a poem. More and more black crows fill up around him and his young daughter Mille. She is trying to discover her own creativity, but is affected by the crows.
Director: Sara Jespersen Holm
Denmark 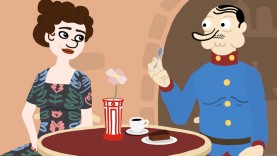 Vienna, 1914. Otto finds a wormhole into another dimension. It has a curious effect on him, and drives both his mental health and his relationship with Emma into ruins. What better way to seek help than to recline on Freud’s divan and start talking?
Director: Turun Anikistit
Finland 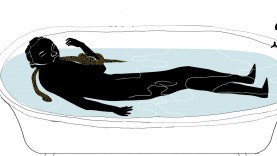 A collector of exotic reptiles lives in a flat occupied by aquariums and terrariums. Surrounded by the luxuriant plants he once planted, each day he attentively looks after his animals, yet strictly controls their behaviour. But a new arrival disturbs his hard-won balance.
Director: Sylwia Gawel
Poland

Saigon, Vietnam. After her mother’s death, a young girl has to quit her studies to take over the family cafe. Every day she crushes ice and grinds beans for ice coffee, while loneliness and sorrow gradually makes her confused. And dangerous.
Director: Stephanie Lansaque, Francoise Leroy
France

A Coat Made Dark

Two burglars strike it rich after stealing a mysterious coat with pockets containing an impossible fortune. The coat also creates a sinister power struggle between the two, and escalates their noir mutterings in the minor key.
Director: Jack O’Shea
Ireland 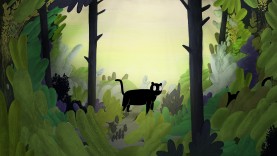 A study of affection in three different chapters through an impact on a distant solar system. Abstract haiku-like situations reveal the change in atmosphere on one planet, caused by the change of gravity and light. This pulsing planet makes the inhabitants become one with each other in various ways.
Director: Reka Bucsi
Hungary

A shipwrecked fisherman finds himself on a strange shore and seeks shelter in a house by the water. Barely knowing his own name from the storm, the house seems full of obscure spirits too, and he is led to a dark secret.
Director: Alex Sherwood, Ben Harper, Sean Mullen
Ireland

When Bill realizes his brother Manny has committed a crime, he agonizes over his dilemma – should he call the police? Through his own decision to stand by his brother in the face of war, crime and capital punishment, Bill paints a tender portrait of a lost life.
Director: Dee Hibbert Jones, Nomi Talisman
United States

A wordless celebration of body hair and rock gods, this is eight full minutes of hairy-beyond-your-wildest-dreams women moving to the sound of disco-rock
Director: Faiyaz Jafri
Hong Kong 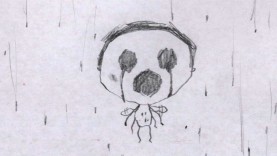 A tiny bug tries to figure out what he wants to be. Tasting his surroundings, he takes shape according to each bite
Director: Grace Nayoon Rhee
United States

Flowers, fire, friendship, and fun. Smile if you self-immolate, smile if you’re run over, rejoice when you go over the cliff.
Director: Ryan Ines
United States

Rise into being. Mature. Perish. A creation story is told through a dialogue between two mythological forces – the West and the East. In it the vibrating entities of black and white are constantly being split apart and reconciled by red, in a playful and dramatic choreography of forms and figures.
Director: Gerhard Funk
Germany

A father rides with his son through the forest. The sick child thinks he sees the Erlking, who both charms and frightens him. Based on Goethe’s poem Erlkönig and the music of Schubert/Liszt.
Director: Georges Schwizgebel
Switzerland

Train takes us on a voyage through dark and surreal landscapes of imagination. Governed by its tracks it arrives at different stages of life: from affection, knowledge, dreams to loneliness and death.
Director: Oliver Chabalier
France

How long, not long

A visual trip that challenges us to think about a universal belonging that doesn’t confine itself to a city, region or national boundary, in an age in which xenophobia, nationalism and intolerance are a daily occurrence.
Director: Michelle and Uri Kranot
Denmark

The Garden of Delights

A demon discovers the gift of creation, by combining animals with surprising effects. In his urge to transform them all, he realizes that one managed to get away. He is driven to possess it, but will end up falling prey to its beauty and charm.
Director: Alejandro Male Garcia Caballero
Mexico

Zteve is the coolest zebra on the savannah. All the other zebras worship him. Zteve leaves his precious stripes on the shore, as goes for a dip in the water hole. But to his utter horror the stripes are stolen. Can he now return to the herd? Are you even a zebra if you have no stripes?
Director: Amalie Naesby
Denmark