I’m sure most of you are well aware that one of the movies to be nominated for a Golden Globe this year did not make the finalist for best animation at the Academy Awards. With a lot of buzz through the internet there are a lot of people wondering why, The Lego Movie was not nominated. Being a fan of the movie myself I was a little surprised that the movie did not make the list as well. Warner brothers and the animation team certainly put a lot of effort and time in making this box office hit, awesome. Phil Lord, who co-directed with Christopher Miller, took the snub in stride, though, tweeting his own Oscar. Miller also tweeted about the snub. 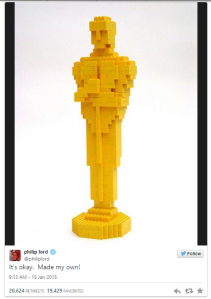 Even though the movie was snubbed for best animation it was nominated for best original song. It will be interesting to see the winner of the best animation category for this year and I’m actually really glad that Song of the Sea and The Tale of Princess Kaguya were both finalist. The Academy Awards will be hosted by Neil Patrick Harris, February 22, 2015. If you have any predictions or thoughts about the animation category or any other categories please write a comment. Every year I make my own predictions of each category for the award ceremony.