The Little Prince is an upcoming French 3D computer animated film based on the 1943 novel, The Little Prince by Antoine de Saint-Exupert. The film is directed by Mark Osborne that has worked on notable films of More, and Kung Fu Panda.His brother is Kent Osborne an American screenwriter, actor and producer and his work includes Spongebob SquarePants and Adventure Time.  The film is produced by Aton Soumache and Dimitri Rassam and written by Irena Brignull. The films stars notable French, Canadian and  American actors like Marion Cotillard, James Franco, Rachel McAdams and Jeff Bridges. The film will be released in France on October 7, 2015 and has a estimated budget of $80 million. 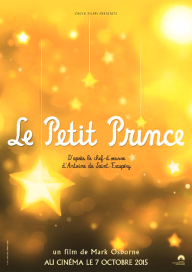 The story centers on a pilot who crash-lands in the Sahara desert and comes across a little boy who says he is a prince fallen to Earth from his home on an asteroid. As the pilot repairs his plane, the little prince regales him with stories about his home and the foolish inhabitants of nearby asteroids. Bridges will be voicing the pilot and Marion Cotillard has the offer to voice the part of a rose. Wild Bunch is overseeing the film sales; US rights have gone to Paramount Vantage, while the film will be distributed by Entertainment One in Canada.[8]