Tony Millionaire is an American cartoonist, illustrator and author known for his comic strip Maakies and the Sock Monkey series. The Sock Monkey series revolves around a sock that looks like a monkey, named Uncle Gabby, and a plush crow named Mr. Crow. Despite being toys, they are able to move, think, talk, eat and interact with other toys. The books are notable for the artwork, dark humor and vaulted dialogue. Four volumes have been published by Dark Horse Comics and other comics, animation and shorts have been created surrounding the merchandising franchise of t shirts and figurines. 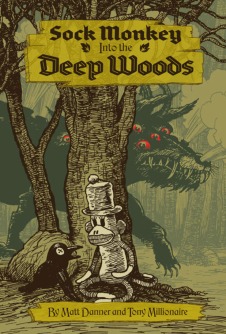 Just recently it has been announced that there is a possible animated feature film in the works for Hollywood. The short animation featuring Uncle Gabby the sock money and his friends who fear their friend has been kidnapped by a monster. Danner, who directed Millionaire’s 2008 adult swim series The Drinky Crow Shows created a live action/CGI proof of concept. He has penned the script and would direct the film if the movie and script is green lit. Growing up reading the comic book series, I’m interested in seeing the final result of the film. I hope the film generates new viewership for a fantastic comic series.