November 15th marked the 25th anniversary of American animated Disney movie, The Little Mermaid. The Little Mermaid is the 28th film in the Walt Disney Animated Classic series and was distributed by Buena Vista. The movie is loosely based on the Danish fairy tale by Hans Christian Anderson. If you’re not well aware of the movie, the story is about a sixteen year old girl named Ariel. Ariel happens to be a  mermaid and the daughter of King Triton. King Triton is the King of the of the sea and Ariel dreams of becoming human. With her best friend Flounder and Scuttle the seagull she meets a young prince named Eric. With multiple songs and dilemmas such as saving the prince and making a trade with Ursula the sea witch, she must face overcoming obstacles to save prince Eric as well as herself. 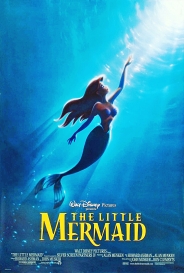 The film was directed and produced by Ron Clements and John Musker. The music was composed by Alan Menken and Howard Ashman who wrote the Academy Award Winning Score. One of the film’s most prominent songs, “Part of Your World”, was nearly cut from the film when it seemingly tested poorly with an audience of school children. The voices of Jodi Benson, Christopher Daniel Barnes, Pat Carroll, Samuel E. Wright, Kenneth Mars, Buddy Hackett and Rene Aubjeronios made this film transpire into the masterpiece it is today. The movie had an overall budget of $40 million and a total estimate of $211.3 million at the box office. The Little Mermaid is listed as one of the top Disney films and holds an overall approval rating of 92% on Rotten Tomatoes.

Interesting Facts:
1. Ariel was quite deliberately made a redhead in order to distinguish her from Daryl Hannah‘s character in Splash (1984).
2. Ariel’s body type and personality were based on Alyssa Milano. The effect of her hair underwater was based on footage of astronaut Sally Ride in weightless conditions
3. In Greek mythology, the God of the Sea is Poseidon, or Neptune in Latin. This movie’s sea king has the name Triton, one of Neptune’s sons.
4. There are several shots of Ariel, sitting on a rock, in a pose reminiscent of the “Little Mermaid” statue that sits in Copenhagen harbor.
5. The first Disney fairy tale since Sleeping Beauty
6. This was the first Disney film to receive an Academy Award since Bedknobs and Broomsticks (1971), though other films had been nominated.
7. The shot of Ariel reaching out through the skylight of her grotto was the last shot to be completed. It took four tries to get the optical effects just right.
8. The printed film format is 35 mm (Eastman 5384) and a 70 mm (blow-up) (Eastman 5384)
9. Ariel’s liplines were created with hand-inking.
10. For this film, the artists received inspiration from the Nielsen story sketches that were brought out of the Archives for them to study, and they gave Kay Nielsen a “visual development” credit on the film. Another first for recent years: Live actors and actresses were filmed for reference material for the animators. Sherri Stoner acted out Ariel’s key scenes. Not all of Disney’s animators approved the use of live-action reference; Glen Keane, the co-supervising animator of Ariel said in an interview with the Orange County Register that one artist quit the project rather than work with live-action reference.