The Lego Movie is a 2014 American/Australian/Danish computer animated film distributed by Warner Bros. Pictures. The film is not only an advertainment movie sponsoring legos and family values but it is also an adventure and comedy movie for children and adults. The film was directed and co written by Phil Lord and Christopher Miller who are known for directing and writing the film, Cloudy with a Chance of Meatballs. Not only has Phil Lord and Christopher Miller made an impact on the increase of Lego purchases after this movie, they also have had many successes related to the visual style of the film, humor, voice acting and message. 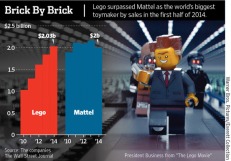 The Lego Movie was released February 7, 2014 and is the first film produced by the Warner Animation Group.  The movie earned more than $257 million in North America and $210 million in other countries making a total of over $468 million worldwide. The overal budget of the film is estimated at $60 million dollars. With the success of the first film a sequel is planned for 2018. I strongly believe for the Academy Awards and Annie Awards, The Lego Movie will win best animation depending on the release and reception of Disney’s, Big Hero 6. Overall, I give this movie 5 bricks out of 5.

2 thoughts on “The Lego Movie Review”